U.S. Flag Flown Over the Capitol  Presented to the Florida School for The Deaf and the Blind by Ashlar Lodge No. 98 F. & A.M.

August 9, 2017 - ST. AUGUSTINE—A U.S. flag flown over the capitol on July 11, 2017 was presented to the Florida School for The Deaf and the Blind by Ashlar Lodge No. 98 F. & A.M. on Wednesday, August 9, 2017.  The flag was accompanied by a certificate noting its authenticity and a packet of ten Braille U.S. Flags for instructional purposes.

The U.S. flag was presented to Dr. Jeanne Prickett, President of the School by Oscar Patterson III, Worshipful Master of Ashlar Lodge No. 98.  The packet of Braille flags was presented to Ms. Carol Bogue, Principal of the Blind Department.

The presentations were made at the School’s main entrance.  Assisting Patterson were
Bo Bozard, Senior Warden of Ashlar Lodge, and Ron DeRoco, Tyler.

Braille U.S. flags are produced by the Kansas Braille Transcription Institute.  The full-color flags were created by Randolph Cabral, founder of the Institute, in 2005 to honor his father, a World War II veteran who lost his sight while in the military.

​            Braille flags feature the Pledge of Allegiance.  A bronze replica was placed at Arlington National Cemetery as a tribute to blind veterans of all wars and other blind Americans. 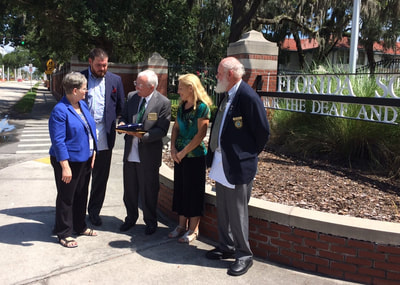 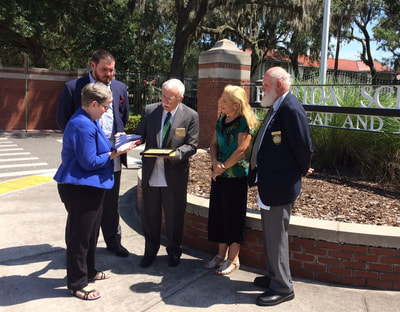 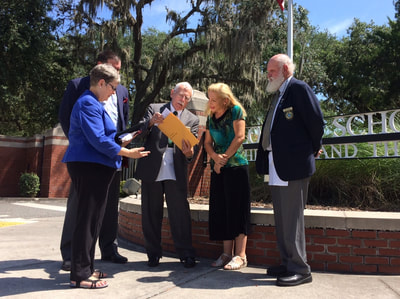 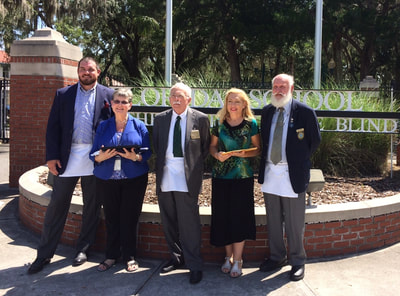